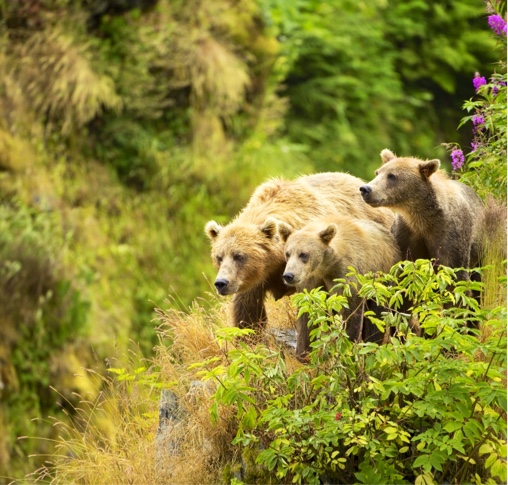 The researchers found that due to warm spring temperatures on Kodiak, the berries were developing fruit weeks earlier, at the same time as the peak of the salmon migration; 2014 was one of the warmest years on the island since record-keeping began 60 years ago. Although there will continue to be considerable variation in Kodiak's climate, the warming trend is likely to continue.

The research team analyzed the bears' scat to find direct evidence that the bears were consuming the berries and not the salmon.

"An earlier berry crop shut down one of the most iconic predator-prey scenes in nature," said Jonny Armstrong, an ecologist at OSU and member of the research team. "As climate change reschedules ecosystems, species that were once separated in time are now getting a chance to interact--in this case the berries, bears and salmon. This is going to have large impacts that are hard to predict."

For example, birds that depend on bears pulling salmon out of the stream, could be seriously affected, he said. Other far-reaching effects may include changes in bear demographics due to the change in their diet, evolving salmon populations and impacts on plant pollinators.

"It is a strange, indirect effect of climate change," Deacy said. "These bears eat dozens of different foods throughout the year but now two of them are overlapping. This is causing a disruption in the food web that could have profound implications for the ecology of the island."

The abundance of salmon and berries on Kodiak Island are why there are so many bears there, and why they are so large, said Jack Stanford, director emeritus at the University of Montana's Flathead Lake Biological Station and one of the study's co-authors.

"This overlap in their resources forces the bears to make a choice that could in the long run result in fewer bears and/or unexpected changes in ecosystem structure," Stanford said. More