GENEVA, March 28 (Reuters) - Climate change could erode the human rights of people living in small island states, coastal areas and parts of the world subjected to drought and floods, the U.N. Human Rights Council said on Friday. In its first consideration of the issue, the 47-member forum endorsed a resolution stressing that global warming threatens the livelihoods and welfare of many of the world's most vulnerable people.

The proposal from the Maldives, Comoros, Tuvalu, Micronesia and other countries called for "a detailed analytical study of the relationship between climate change and human rights", to be conducted by the Office of the U.N. High Commissioner for Human Rights, headed by Louise Arbour.

"Until now, the global discourse on climate change has tended to focus on the physical or natural impacts of climate change," the Maldives' ambassador to the United Nations in Geneva, Abdul Ghafoor Mohamed, told the session. More >>>
Posted by Unknown at 2:42 PM

It won't be easy but we can fix our oil and climate problems at the same time.

March 28, 2008 | For more than a decade, a fierce debate about peak oil has been raging between those who think a peak in global oil production is at hand and those who think the world is not close to running out of oil. The debate is moot for two reasons. First, the growing threat of global warming requires deep reductions in national and global oil consumption starting now, peak or no peak. Second, relying on unconventional oil like tar sands and liquid coal to make up a supply shortage, as the oilmen say we must, would be climate catastrophe. More supply is not the answer to either our oil or our climate problem -- reducing consumption of oil is. And right now we have two feasible solutions: greatly increase our vehicle fuel economy and find alternative fuel sources that are abundant, low-carbon and affordable. More >>>
Posted by Unknown at 9:53 PM

Can we save our troubled planet? 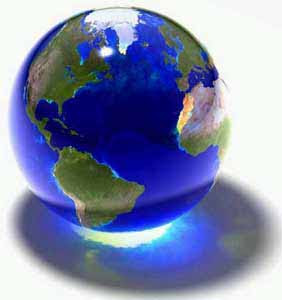 The main problem for humankind in this present century are immense

Tehran - Dr David Hill is the chief executive officer of the UK-based World Innovation Foundation (the WIF) and the World Innovation Foundation Charity (the WIFC) that is based in Bern, Switzerland। The WIF is an outwardly looking global institution now comprising of around 3,500 of the world's leading-edge 'independent' scientists, engineers, technologists and economists. They are generally regarded as the 'Peers' of their respective professions and sciences; most are listed in the ISI rankings of the foremost scientists in the world today.

... The main problem for humankind in this present century are immense, the greatest that they have ever had to address. Indeed, if we do not get our act together as a species, we run the very high risk of our extinction. I say this with a heavy heart, but where the present economic development system is inherently flawed greatly in that we are all grasping for the world's finite resources that one-day will run out.

Yang told reporters that China's per capita emission of the gases linked to global warming remained less than one third the average in developed countries.

"It's like there is one person who eats three slices of bread for breakfast, and there are three people, each of whom eats only one slice. Who should be on a diet?" he said at a press conference on the sidelines of parliament.

"If per capita energy consumption is viewed in the context of the fundamental principle that people are all born equal, then I don't think some people are justified in talking about the large emissions of China, as if they have the moral high ground."

China's greenhouse gas output has soared in recent years as its largely coal-powered economy has expanded at double-digit pace, and it now ranks alongside the United States as the world's biggest emitter. More>>>

[All countries need to go on a ‘climate change diet‘ if the truth be known. The developed countries however have an obligation to help the less developed and developing countries implement carbon sequestration / mitigation strategies as well as to implement alternative energy projects. Editor]

Memo to everyone who doesn’t care about climate change

Memo to everyone who doesn’t care about climate change—you know who you are—because you figure 1) more heat waves? I have A.C.; 2) rising sea levels? I don’t live in Bangladesh, and I have enough money to keep rebuilding the sea walls around my weekend place; 3) more droughts and floods, causing food shortages? I won’t have any problem buying whatever I need. Scientists have identified consequences of climate change that you won’t be able to buy your way out of: the worst airplane delays you can imagine.

I’ve long thought that Americans don’t really care all that much about climate change because they figure its worst impacts will hit other people. In particular,the poor (Hurricane Katrina, anyone?). But a report by the National Research Council released today on how climate change will affect transportation points out that this is one environmental mess that you won’t be able to buy your way out of. More>>>
Posted by Unknown at 7:03 PM