Dakar - 28 August 2008 - The delegates at the U.N. conference on climate change in Ghana say they are pleased with the progress made after a week of negotiations. Brent Latham reports from our West Africa bureau in Dakar, the parties hope to shape a new global environmental regime to further incorporate African countries in the fight against global warming.

The U.N.-sponsored meeting in Accra was one in a series aimed at forging a deal to replace the Kyoto protocol, which expires at the end of 2012, and was never fully embraced.

The process has sped up, and parties have become more serious about reaching an agreement, said executive secretary of the U.N. Framework Convention on Climate Change. Yvo de Boer said that time is running out to come to reach an accord on climate change, and that he witnessed a growing sense of urgency at the conference. More >>>
Posted by Unknown at 9:02 PM 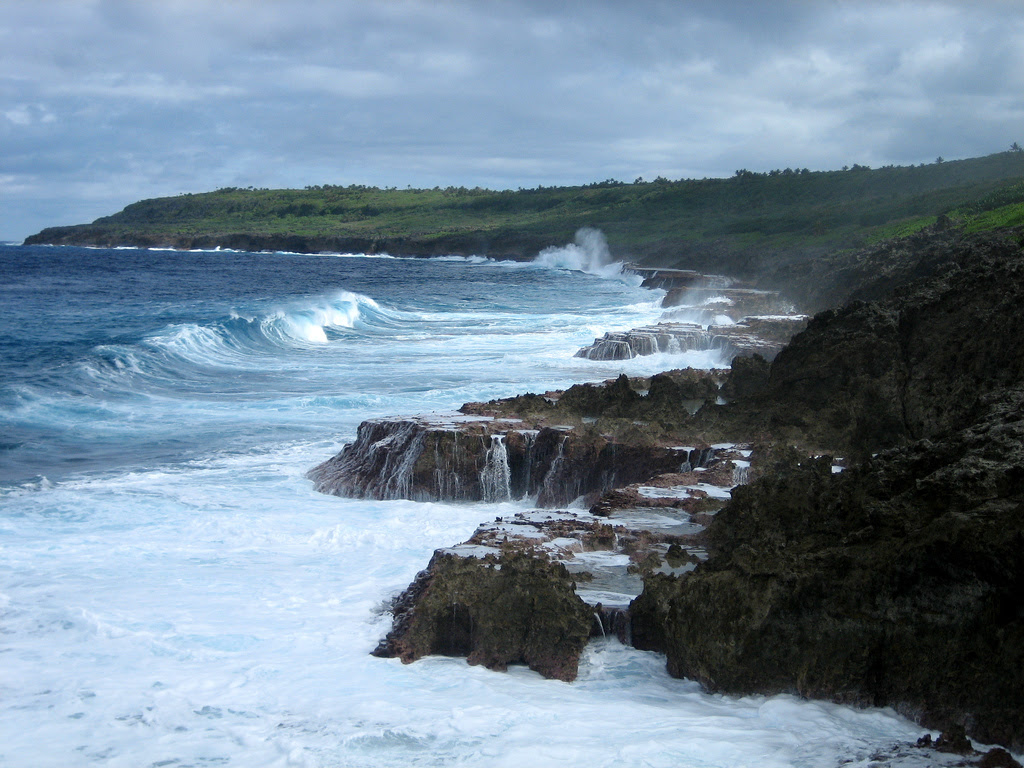 That was the warning from the leader of the tiny Pacific Island of Niue, as regional leaders gathered on the island for their annual summit. More >>>

Climate Change Could Be Impetus For Wars, Other Conflicts, Expert Says

ScienceDaily (Aug. 22, 2008) — Hurricane season has arrived, sparking renewed debate regarding possible links between global warming and the frequency and severity of hurricanes, heat waves and other extreme weather events.

Meanwhile, a related discussion has ensued among international-security experts who believe climate-change-related damage to global ecosystems and the resulting competition for natural resources may increasingly serve as triggers for wars and other conflicts in the future.

Jürgen Scheffran, a research scientist in the Program in Arms Control, Disarmament and International Security and the Center for Advanced BioEnergy Research at the University of Illinois, is among those raising concerns. In a survey of recent research published earlier this summer in the Bulletin of the Atomic Scientists, Scheffran concluded that “the impact of climate change on human and global security could extend far beyond the limited scope the world has seen thus far.” More >>>
Posted by Unknown at 9:51 PM 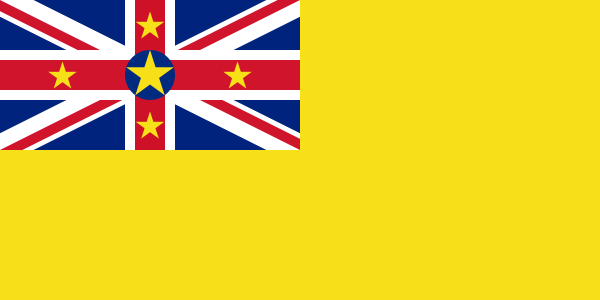 ALOFI, Niue, Aug. 18 (Xinhua) -- As last-minute preparation work is being carried out in the small island nation of Niue, heads of the government from guest countries are landing here for the Pacific Islands Forum (PIF) summit to be held from Tuesday to Thursday.

As a key political and economic policy organization in the Pacific, the 16-member PIF meets annually to develop collective responses to regional issues. When leaders meet this week in the isolated coral atoll thousands of kilometers north-east of New Zealand, climate change and Fiji's stalled election process will top the agenda.

The effect of "global warming" has been a threat to food security and safety of island communities. As a consequence, many Forum Island countries are already subjected to sea level rising.

"It is hoped that Niue as host will take the lead in navigating change to combat the overwhelming effects of climate change and to encourage the PIF to raise its stance on the issues of climate change and not just paying lip-service but be active and promoting all means of renewable energy, recycling, re-use and so forth," the Niue government said in its website for the summit. More >>>
Posted by Unknown at 11:43 AM

But hit by rising fuel costs and worried about the impact of global warming, particularly on its delicate flora and fauna, the small island nation has set itself the ambitious goal of cutting its greenhouse gas emissions to zero.

By 2025, the French territory wants to use renewable energy sources to produce 100 percent of its electricity, and to power all of its transport by 2050.

"We have water, sunshine, we even have an active volcano. We have more energy than we need for our development," Paul Verges, president of Reunion's regional council, said after Group of Eight (G8) leaders agreed a 50 percent cut in carbon dioxide (CO2) emissions by 2050 More >>>
Posted by Unknown at 9:27 PM

Mass Extinctions And 'Rise Of Slime' Predicted For Oceans

ScienceDaily (Aug. 13, 2008) — Human activities are cumulatively driving the health of the world's oceans down a rapid spiral, and only prompt and wholesale changes will slow or perhaps ultimately reverse the catastrophic problems they are facing.

Such is the prognosis of Jeremy Jackson, a professor of oceanography at Scripps Institution of Oceanography at UC San Diego, in a bold new assessment of the oceans and their ecological health. Jackson believes that human impacts are laying the groundwork for mass extinctions in the oceans on par with vast ecological upheavals of the past.

He cites the synergistic effects of habitat destruction, overfishing, ocean warming, increased acidification and massive nutrient runoff as culprits in a grand transformation of once complex ocean ecosystems. More >>>
Posted by Unknown at 12:19 PM

GLOBAL: What we are doing about climate change

JOHANNESBURG, 5 August 2008 (IRIN) - In developing countries, where survival is often a daily struggle, people cannot afford to wait for their government to bail them out. Many are living in the grip of climate change, coping with frequent droughts, heavy flooding, intense cyclones and other extreme weather events, and have found ways to adapt:

- In Bangladesh, women farmers faced with frequent floods are building 'floating gardens' — hyacinth rafts on which to grow vegetables in flood-prone areas.

- In Sri Lanka, farmers are experimenting with rice varieties that can cope with less water and higher levels of salinity in the water.

But, on a global scale governments continue to be deadlocked on the issue of reducing the emission of dangerous greenhouse gases, such as water vapour, carbon dioxide, ozone and methane, which are making the earth warmer. According to the UN World Meteorological Organisation (WMO), the decade from 1998 to 2007 was the warmest on record.More >>>
Posted by Unknown at 12:42 PM

We CAN Solve it With Alternative Energy 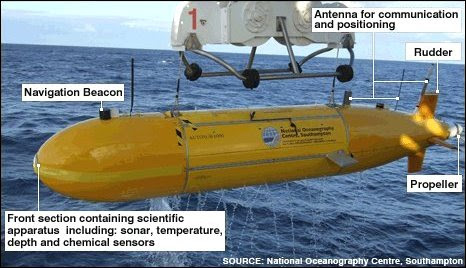 August 9 2008: Scientists are set to explore the world's deepest undersea volcanoes, which lie 6km down in the Caribbean. Delving into uncharted waters to hunt for volcanic vents will be Autosub6000, Britain's new autonomously controlled, robot submarine. Once found, the life, gas and sediment around the vents - the world's hottest - will be sampled and catalogued.

The research will be carried out by a British team aboard the UK's latest research ship, the James Cook.
"We are heading out on two expeditions, each close to a month long, to map the full length of the Cayman Trough," said team leader, Dr Jon Copley of the National Oceanography Centre in Southampton (NOCS).
Dr Copley explained that the Cayman Trough, which lies between Jamaica and the Cayman Islands, is a product of the Caribbean tectonic plate pulling away from the American plate.

"It is the world's deepest volcanic ridge and totally unexplored," the Southampton-based researcher told BBC News. More >>>
Posted by Unknown at 2:34 PM

Rock Port, Missouri is the first one hundred percent wind powered community in the United States

ScienceDaily (July 16, 2008) — Rock Port Missouri, with a population of just over 1,300 residents, has announced that it is the first 100% wind powered community in the United States. Four wind turbines supply all the electricity for the small town.
Rock Port’s 100% wind power status is due to four wind turbines located on agricultural lands within the city limits of Rock Port (Atchison County). The city of Rock Port uses approximately 13 million kilowatt hours of electricity each year. It is predicted that these four turbines will produce 16 million kilowatt hours each year. More >>>
Posted by Unknown at 11:27 AM

CCCCC Mission Statement:
Through its role as a Centre of Excellence, the Centre will support the people of the Caribbean as they address the impact of climate variability and change on all aspects of economic development through the provision of timely forecasts and analyses of potentially hazardous impacts of both natural and man-induced climatic changes on the environment, and the development of special programmes with create opportunities for sustainable development.

Aug. 1, 2008 -- It's one of the most dramatic examples of climate change in Earth's history, and scientists now say it happened almost entirely in one year's time.

Thirteen thousands years ago, Europe was much like it is today -- cool but temperate, with great forests carpeting the land. Ice sheets still nibbled at Finland and Sweden, but for much of the continent the last Ice Age was a distant memory. Suddenly, the climate went haywire. Warm Gulf Stream currents that brought heat from the equator up toward the pole began to fail. Temperatures plummeted 3 to 4 degrees Celsius, and stayed that way for a millennium.

Now scientists believe they've pinpointed the exact time the northern hemisphere was plunged back into a deep freeze. Examining sediments preserved at the bottom of a remote lake in western Germany, they found that what's known as the Younger Dryas cold period took just a year to sweep across the continent, starting in the autumn, 12,679 years ago. More >>>
Posted by Unknown at 5:52 PM