Earth Hour 2012 - Dare The World To Save The Planet

DARE THE WORLD TO SAVE THE PLANET

We only have one planet. You can help protect it. Participate in the world’s largest single campaign for the planet: Earth Hour. It starts by turning off your lights for an hour at 8:30 pm on March 31, 2012 in a collective display of commitment to a better future for the planet. Think what can be achieved when we all come together for a common cause.

The Four Horsemen: How The World Really Works

The Georgia Guide Stones: A Guide To The Age Of Reason or...

The Georgia Guidestones is a large granite monument in Elbert County, Georgia, USA. A message comprising ten guides is inscribed on the structure in eight modern languages, and a shorter message is inscribed at the top of the structure in four ancient languages' scripts:Babylonian, Classical Greek, Sanskrit, and Egyptian hieroglyphs. 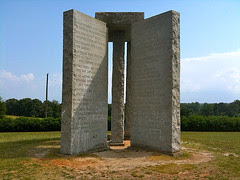 Given the events that humanity will have to deal with going forward into this century the Guides inscribed in these stones are certainly worthwhile precepts to follow.

We have Climate Change, Energy Security, Water Security, Food Security and a Burgeoning Population. All of these topics are potential Conflict Triggers. Do you see any corelation to the ten precepts above?

The question, will we be smart and altruistic enough to heed warnings like these on the Georgia Guide Stones or will these stones become the Stonehenge of 2112?

The choices we make today, as spoken of by James Hansen (climate change link above) of making drastic cuts to CO2 and methane output, instead of Business as Usual (BAU) and subsidies to the oil companies will will have either positive or negative effects on our children and grand children's quality of life. making the right decisions now may well be creating the conditions to avoid conflict in the future.

There are many of us who work for non-governmental and research organizations who question how we are going to feed 9.5 billion of this planets population in fourty years time. When we think about agriculture irrigation immediately comes to mind. As the worlds climate heats up rainfall patterns will change with some areas having drought and others having devestating flooding as Australia and Pakistan have experienced in recent years.

These threats were first raised by The Club of Rome fourty years ago. The Club of Rome was founded in 1968 as an informal association of independent leading personalities from politics, business and science, men and women who are long-term thinkers interested in contributing in a systemic interdisciplinary and holistic manner to a better world. The Club of Rome members share a common concern for the future of humanity and the planet. The aims of the Club of Rome are: to identify the most crucial problems which will determine the future of humanity through integrated and forward-looking analysis; to evaluate alternative scenarios for the future and to assess risks, choices and opportunities; to develop and propose practical solutions to the challenges identified; to communicate the new insights and knowledge derived from this analysis to decision-makers in the public and private sectors and also to the general public and to stimulate public debate and effective action to improve the prospects for the future. Humanity however, have not heeded this warning. Time is runing out and a tipping point will be reached at which point we will have a runaway, out of control catastrophe.

Watch David Wasdell, Director of the Meridian Programme as he talks about climate change. At 24 minutes into the presentation he talks about NASA being afraid to release findings of methane releases off the coast of San Diego for fear of retribution by the Bush administration. David Wasdell, Director of the Meridian Programme, is a world-renowned expert in the dynamics of climate change. He is also a reviewer of the International Panel on Climate Change (IPCC) assessment reports and the author of numerous papers and presentations on climate change and related topics. For more on David Wasdell visit: www.meridian.org.uk

In politics we must remember what Mikhail Gorbachev said, "Today one often hears that politics is a dirty business, incompatible with morality. No, politics becomes dirty and a zero-sum, lose-lose game only when it has no moral core". Mikhail Gorbachev - The Soviet Union’s last General Secretary and first President.

Are we smart enough to heed the advice given to us by some of our best thinkers or are we headnig for centuries of conflict, theocratic states and a new dark age? The choice is ours. Act now while there is still a little time.