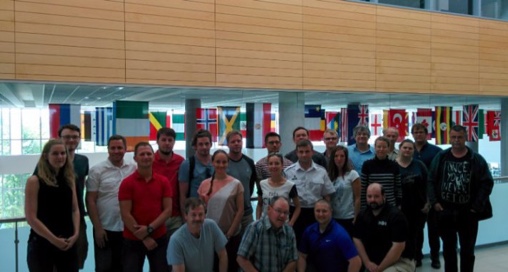 Reflections from the Field: A Historian Attends a Science Workshop on Underwater Munitions, 27 June to 1 July 2016.

Pasta http:// Link above in your browser to see pictures related to article.

The view was simply magnificent. Looking across Halifax Harbour from Dartmouth, I could see a bustling waterfront full of people and tourist shops. Sea gulls flew overhead while several boats traversed the upper harbour heading out toward the Atlantic Ocean. The breeze was salty, the air was warm, and the skies were clear and sunny. But the beautiful scenery obscured the dangers hidden far below the surface. Along coastlines around the world, a threatening legacy of war and disarmament lays buried in the seabed: dumped conventional and chemical munitions. Primarily thrown in the oceans between the 1920s and 1970s, these tools of death and destruction are now corroding away and polluting their surrounding marine environments with toxic chemicals and carcinogens.

The total amount dumped at sea in the twentieth century remains unknown, but experts estimate that roughly 1 billion tons of conventional and chemical munitions were disposed of in the oceans. Depending on whom you ask, opinions on the dangers will vary. Some scientists believe that underwater munitions should be left where they are and monitored closely for any serious changes, while others consider them an unfolding environmental disaster and advocate for their immediate removal. More