You can't negotiate with a hurricane 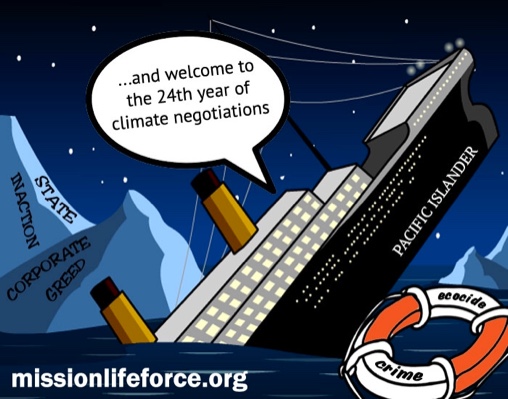 It's impossible to negotiate with a hurricane. Or a dying coral reef. Maybe it is unsurprising that 23 years of climate negotiations have not abated the dangerous industrial activity we know causes climate ecocide as well as ecological ecocide. After all, the system used to address the problem is based on trade and commerce, not justice.

The Paris agreement was useful in that it proves we all know and agree that industrial activity is linked to climate change. No government minister or CEO can claim lack of knowledge. What it lacks is legal teeth. Without a crime of ecocide, we cannot hope to seriously address the causes of climate loss and damage.

RE-ARRANGING DECKCHAIRS ON THE TITANIC
The COP23 climate negotiations in Bonn take us no closer to a just outcome. It's like watching an intricate rearranging of deckchairs on the Titanic, complete with special mechanisms, processes and interim reports. The Pacific islands were well represented thanks to Germany, and yet the touching address from young Fijian Timoci Naulusala "it’s not about what, or how, or who, but it’s about what you can do as an individual" sums up the quantum failure of political will as a whole.

For the Monsantos and Rio Tintos of this world, it signals the go-ahead to continue to recklessly disregard their climate and ecological responsibilities. Timoci Naulusala's statement - whilst well meant - implictly accepts the transfer of responsibility away from where it truly lies, from the industrial polluters
https://goo.gl/R6xj76