As governments and aid agencies scramble to deliver desalination plants and bottled water to drought stricken Pacific Island nations of Tuvalu and Tokelau, other Pacific Island nations - Samoa and the Cook Islands - are preparing for a similar fate.
Is this band-aid approach to solving this problem going to be enough?

Redina Auina, spokeswoman for the Tuvalu Faith Based Youth network, who partner with 350.org, is in Tuvalu and describes the feelings of people as they face the reality of less than 5 days of drinkable water in the nations capital, Funafuti --
Experts say the past 12 months have been the second driest in Funafuti's 78 years of records. While we do not make any claims to it being solely a climate change related event, the reality is that the line between what is normal climatic variation and what might be extremes resulting from accelerated climate change is being blurred. This is particularly true for the hydrological cycle, which is sensitive to even subtle variations in the global climate and often results in either too much water, or in our case at the moment, too little. With an intense La Nina weather pattern over much of the Pacific, we’re not likely to see rain for months to come. It’s these kind of extremes that we are told will become our new reality for Tuvalu and the Pacific region as a whole. More >>>

Well, it doesn’t come as a huge surprise to see this statement from NASA’s James Hansen, perhaps the top climate scientist in the world. But

it’s a statement we seem to keep ignoring. Here’s the statement I’m referring to:

“Climate change — human-made global warming — is happening. It is already having noticeable impacts…. If we stay on with business as usual, the southern U.S. will become almost uninhabitable.”
Dr. James Hansen has a new paper out on global warming and climate science (and Monarch butterflies), but aside from tackling the science alone, Dr. Hansen also delves into the problems stopping us from addressing these problems. Here’s a piece of that:

There is ample evidence of growing climate disruption. But despite record or near-record heat and drought in the United States this past summer with simultaneous extreme flooding, and despite comparable extremes in China and elsewhere, there has been little public discussion of the connection of these climate extremes with human-made climate forcing.

The media are partly responsible for the silent summer, as they have mainly chosen not to examine connections between climate anomalies and human-made causes. A cynic may ask whether their silent summer is related to increasing right-wing control of media and large advertising revenues from fossil fuel companies. More >>>

Food prices - from crisis to stability

Price swings, upswings in particular, represent a major threat to food security in developing countries. Hardest-hit are the poor. According to the 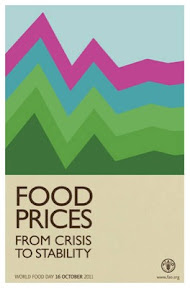 “FOOD PRICES – FROM CRISIS TO STABILITY” has been chosen as this year’s World Food Day theme to shed some light on this trend and what can be done to mitigate its impact on the most vulnerable.

On World Food Day 2011, let us look seriously at what causes swings in food prices, and do what needs to be done to reduce their impact on the weakest members of global society. More >>>

Pakistan: Another Victim of Climate Change 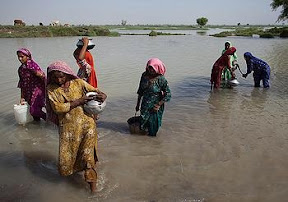 massive monsoon rains in Pakistan, which so far this year have affected eight million people, claiming 350 lives and damaging 1.3 million homes.
Over the past month, the country's southern region has received the highest monsoon rains ever recorded, local metrological experts confirm.

In August, the southern parts of the country received 270 percent above-normal monsoon rains. And in September, the monsoons rains were 1,170 percent above normal, says Dr. Qamar-uz-Zaman Chaudhry, Adviser Climate Affairs.

The Sindh province, where six million acres of land were inundated in current floods, had experienced severe drought conditions before the monsoon season and had not received any rainfall at all during the past 12 months.

Aid agencies are scrambling to help the multitude of flood victims - more than 1.5 million people are living in temporary camps.

Pakistan has witnessed swift climate change because of rising temperature and flooding downpours in the past two years. Climate experts consider this unexpected change as a part of broader regional climate changes also happening in the neighboring countries. More >>>

During the shooting of his 2010 documentary “Climate Refugees,” the Irish-American filmmaker Michael Nash visited nearly 50 countries in about 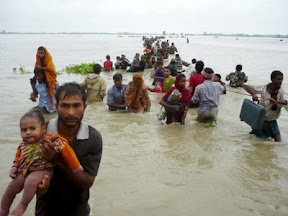 His conclusion was that short- and longer-term changes in climate are causing vast numbers of people to abandon their jobs, homes and countries to seek better lives elsewhere, or to simply survive. (Jeffrey Gettleman’s recent coverage of the Somali refugee crisis in The Times has offered some vivid and disturbing examples, although Somalia’s troubles are also inextricably linked to political turmoil.)

Mr. Nash poses a basic question: what will become of the millions of people whose lack of access to food and clean water leads them to take increasingly desperate measures? What type of strains will huge migration put on resources in more developed countries?

Will this dislocation eventually, as the retired Navy vice admiral Lee Gunn told Mr. Nash, pose a threat to Americans’ national security, too?

By focusing on the consequences of climate change rather than its scientific causes, some experts suggest that Mr. Nash succeeded in circumventing a divisive political debate over global warming and the extent to which human activity contributes to it. More >>>